“A heuriger is hard to translate, but probably best put as wine tavern,” says Stephanie Tscheppe-Eselböck, who owns Gut Oggau with her husband Eduard Tscheppe. “It’s an ancient tradition, dating back to the end of the 18th century.”

Something akin to a wine-centric version of Germany’s biergartens, heuriger offers oenophiles a chance to enjoy a new vintage in the very place it was made. Although little known outside of Austria, the tradition continues to be widely popular—perhaps not surprising considering per capita wine consumption in Austria is almost triple America’s. But the wine consumed at most heurigers tends to be of the conventional, mass-produced variety, which makes Gut Oggau’s heuriger all the more remarkable.

“Vineyards are allowed to open their doors on a seasonal approach and serve local food with their wine,” Tscheppe-Eselböck says. In the case of Gut Oggau’s heuriger, this means inviting guests to their winery, located in the middle of Oggau, a small village in Austria’s Burgenland region.

In the natural wine world, it’s hard to find a more celebrated—or Instagrammed—winery than Gut Oggau. Their story is familiar to many natural wine drinkers but bears repeating. Tscheppe, the son of wine producers in Austria’s Tyrol region, and his wife Tscheppe-Eselböck, the daughter of Michelin-starred restauranteurs, bought an abandoned winery in Tscheppe-Eselböck’s native Burgenland region, releasing their first vintage in 2007. Taking over the estate meant inheriting old vines, some now more than 60 years old.

Rather than focusing on variety, Gut Oggau’s different cuvées are blended according to vineyard sites. Tscheppe and Tscheppe-Eselböck created a different character for each cuvée, illustrated by the artist Jung von Matt. Whether it’s the “young and attractive” Atanasius or the “strong and resolute” Mechthild, each character is designed to represent the personality of that wine. The family is divided into three generations: the mature and refined older generation, the strong and bold middle generation, and the youthful and energetic younger generation.

Although their branding is contemporary, Gut Oggau’s vinification techniques couldn’t be more traditional. The Demeter-certified estate is fully biodynamic. In the cellar, grapes undergo spontaneous fermentation with their native yeast. The “older generation” cuvées are pressed with a restored 200-year-old screw press. All of their wines, even their whites, are bottled unfined, unfiltered, and without the addition of sulfur.

The unlikely convergence of such unadulterated winemaking and impeccable branding has created a cult following around the world. Indeed, Gut Oggau’s wines are something of a shibboleth. Whether on the shelf or behind a bar, those distinctive faces have encouraged me to take a chance on an unknown wine shop or bar.

The popularity of Gut Oggau’s wines makes the approachability of their heuriger all the more surprising. Unlike the massive wine corporations that offer the public tastings and tours at visitor centers, most natural winemakers are small operations, often with no full-time employees. Those that accept guests are typically by appointment only. But if the stereotypical natural winemaker is the reclusive hermit, eschewing modern technology and society, Tscheppe and Tscheppe-Eselböck are the budding extroverts.

“Since we both love to host, it was obvious we would open our doors during vegetation season,” says Tscheppe-Eselböck. Oggau is an hour’s drive from Vienna—slightly longer if one takes the commuter train, followed by a local bus, as I discovered firsthand. For me, the extra travel time is worth being able to stare out the train window and watch as Vienna’s neoclassical apartment blocks give way to idyllic farmland. The gentle slopes are marked with orderly rows of trellises that give the landscape a sense of precision. This is gorgeous countryside, swarming with cyclists taking advantage of the region’s extensive bike trails. Burgenland is also famous for Lake Neusiedl, a national park that attracts birdwatchers from around the world due to its biological diversity. Oggau is one of several towns that surround the lake. When I arrive with my family, Tscheppe-Eselböck and Tscheppe are busily bussing tables between greeting guests. It’s a holiday in Austria—Whit Monday—and clearly we’re not the only ones who’ve decided to enjoy the day in wine country.

Tscheppe is tall with tousled hair and a warm smile. A billowy white linen shirt hangs impressively from his broad frame. Tscheppe-Eselböck is tall and slim; she wears large sunglasses and a green-and-white-striped blouse that serves to highlight her brilliant red hair. They both exude a certain energy—a hospitality that feels disarmingly authentic.

Before we visit, I am nervous about bringing my children. I’ve been to my fair share of wine bars and wine-driven restaurants. It’s safe to say they’re not the sort of places one can get a high chair. But when I ask ahead, Tscheppe-Eselböck replies, “Of course the next generation is welcome.” Whether the response was an illusion to the generational theme of their wines or simply a reflection of the fact that Tscheppe and Tscheppe-Eselböck are also parents, we quickly discover in Austria, heuriger is a family affair. As we’re shown to our table—a large, weather-worn farmhouse table we share with another couple—I notice we’re far from the only family there. Before we even sit down, my children make a beeline for the farm animals: chickens and sheep that share the courtyard with diners. Other children sit at a kid-sized picnic table, drawing on Gut Oggau-branded coloring pages. It occurs to me that more wine taverns should have play places.

Our food quickly arrives, and I’m only able to corral my children with the promise of fresh grape juice, which comes chilled in a small decanter. It is unquestionably the fanciest juice my kids have ever consumed.

The food at Gut Oggau’s heuriger is a fixed spread with optional add-ons. It comes on three-tiered platters in generous portions.

“The food is meant to be served cold, basic stuff like cheese, charcuterie, vegetables, and the like,” says Tscheppe-Eselböck. From my perspective, however, the menu at Gut Oggau’s heuriger is anything but basic: fresh and pickled vegetables, local cheeses, charcuterie, egg salad, and spicy sausages. Coupled with fresh loaves of sourdough bread and local butter, this is a heuriger you can come hungry to.

“The menu is always changing according to seasons and availability. All the dishes are served very purely after having sourced the best possible produce or growing them ourselves,” says Tscheppe-Eselböck. “The menu is based on mainly Mangalitza pig, the typical breed of the region.” As impressive as the spread is: it’s, of course, the wine that takes center stage. Gut Oggau’s heuriger offers a rare chance to taste almost their entire line-up by the glass, not to mention a few guest wines from friends. To those accustomed to paying standard restaurant markups, the prices are remarkably affordable. A glass of the “younger generation” costs €3.5. While the older generation—wines you’re unlikely to find by the glass elsewhere—cost in the neighborhood of a typical glass pour at a high-end restaurant.

A particularly special cuvée on the menu is the “Family Reunion” 2016 rosé. A difficult year in the vineyard left the crop decimated by frost and hail. Tscheppe and Tscheppe-Eselböck were forced to forgo their typical cuvées and bottle three field blends: a white, red, and rosé. The rosé is a blend of what normally would be “Winifred” and “Josephine,” as reflected by the split face bottle. This blend of Zweigelt, Blaufränkisch, and Roesler shows remarkable complexity and depth; the sort of serious rosé to convert skeptics. It’s nonetheless refreshing and food-friendly, as any rosé should be. The cuvée embodies so much of what I, and many others, love about Gut Oggau’s wines: worthy of reflection, but decidedly quaffable.

“We love to host guests and we are happy to give them an insight into our world of agriculture and farming as well as our philosophy in terms of biodynamics,” says Tscheppe-Eselböck. “But in the end, it is just sharing some good times.” 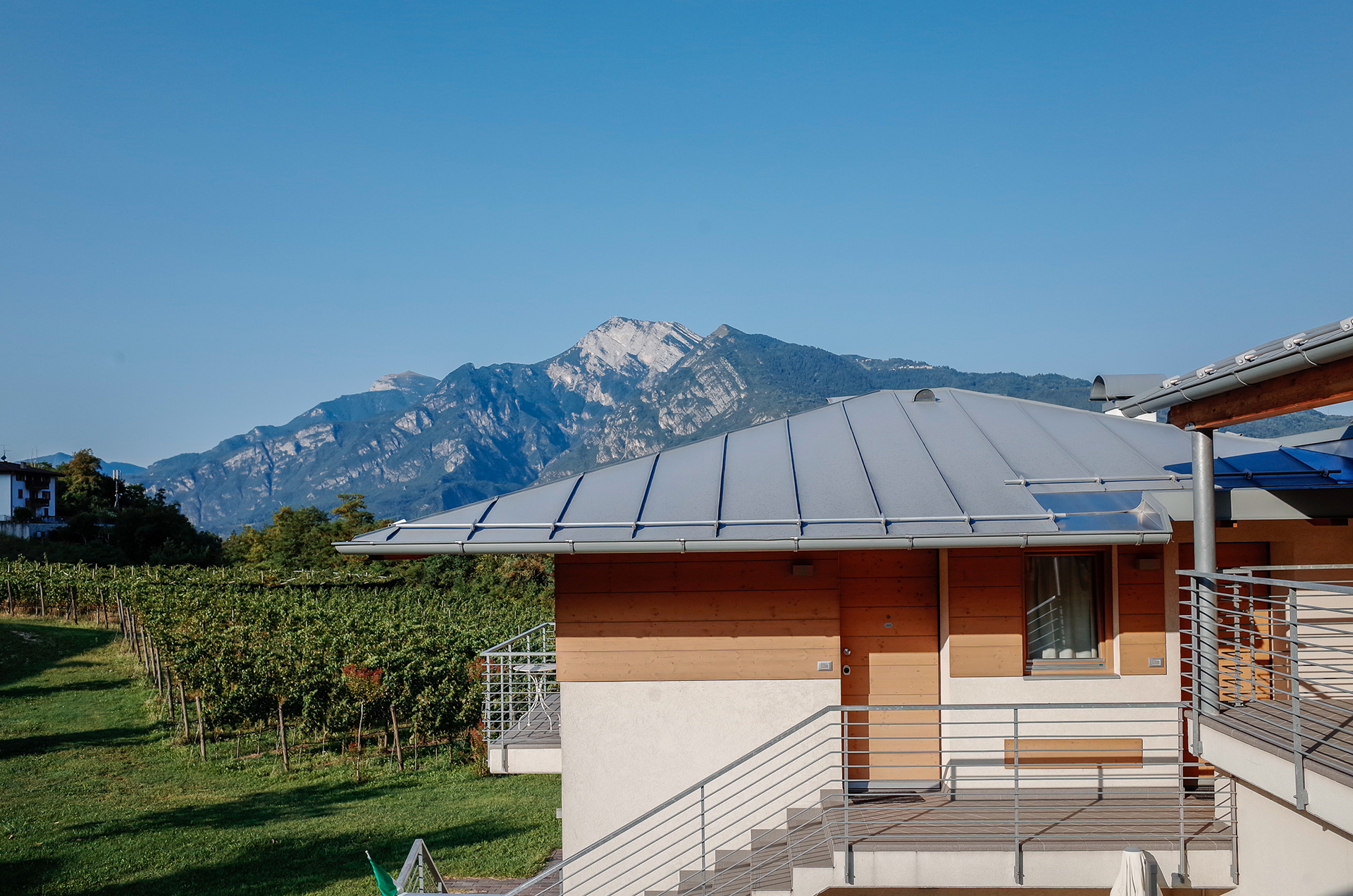