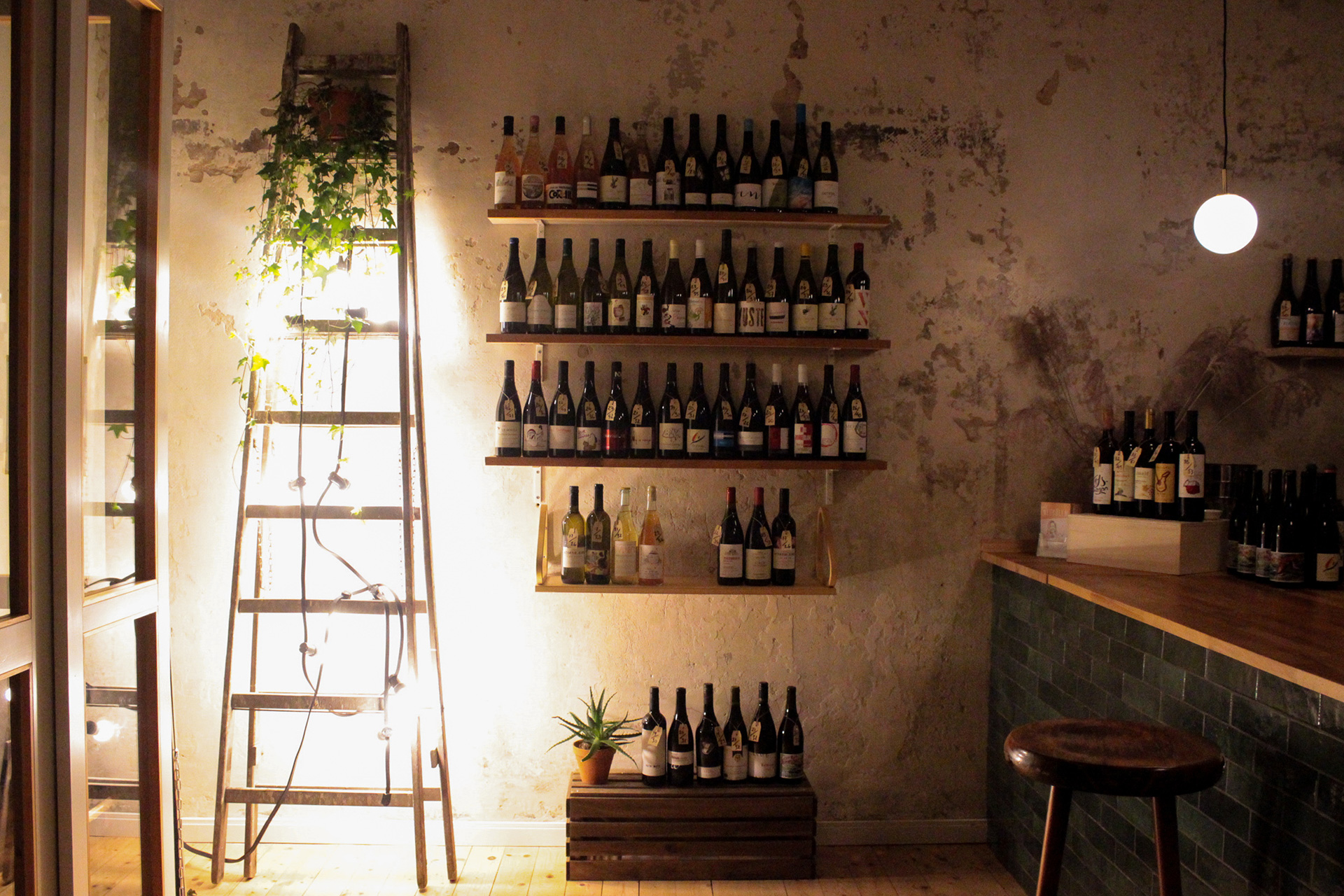 Natural wine is not new to Berlin. Vini Culture, the venerable wine shop based in Kurfürstendamm, has been selling desirable small producer European wines (many made naturally) since 1984; they made a conscious switch to more “outrageous” wines around 2006. Owner Holger Schwarz and staff have been pushing wines with little interference before many even knew what “natural” wine meant. Over the last few years, wine bars like Austrian-inspired Cordobar and French-influenced Jaja (featured previously on Sprudge) have become local favorites, creating a lingering desire for both party pét-nats and complex, challenging wines from around the world (and from right here in Germany's burgeoning natural wine producer scene).

Within the 12 boroughs of Berlin, natural wine's firmest footing can be found in the Neukölln neighborhood, long one of the trendiest neighborhoods of the city and home to a diverse, global population of residents and visitors. While over the last few years the cost of rent has been increasing (to the dismay of many), so too have the number of natural wine bars, craft beer spots, and specialty coffee shops. Most of the shops focused on in this guide are all based in Neukölln, but that is not to say the “trend” has not appeared in other districts.

Low-intervention wine is now appearing on the menus of more established bars, gracing the displays of cafes, and becoming an integral part of Berlin's booming pop-up restaurant culture. If you are only in Berlin for a few days, it's always an idea to check the internet to see what 8greenbottles, SomaVines, and Ladidadiwines are up to. Along with what might be going down event-wise at Markthalle Neun and Michelbrrger Hotel.

Natural wine has fast become an integral part of what it means to be young and cool in Berlin—here are five of my favorite bars from around the city, with more seeming to open every weekend. On the edge of the abandoned airport Tempelhofer Feld, Palsta has been catching some lingering sunsets since the summer of 2018. As the days turn to evenings, the Nordic-inspired natural wine and food spot catches the best light, right into the red brick back room, making you forget you’re only a few streets away from a bustling central district. The front room, with its cyan-colored bar, has rows of shelves of natural wine on the left as you come in. Plenty to choose from. You enter underneath a glass window supporting a mountain of discarded corks, a reminder of all the bottles that have already been savored.

The menu, shifting with ingredients that are of their current best quality, boasts plenty of carefully prepared seafood and pickled dishes. The kitchen may even have a guest chef joining for that week. Ask your server for a pairing recommendation from the shelf. Popular dishes so far have been Shrimp Tartar and the Gravlax with Pickled Salsify, Trout Roe, and Egg Salad. Barra is new, yet it's already fast becoming popular among the Berlin locals. The business started between sommelier Kerry Westhead and chefs Daniel Remers and Neil Paterson. Formally a pop-up called “To The Regiment!”, the troupe of owners now plant roots in the base neighborhood of Neukölln. The menu is guided by the seasons, with sharing plate options changing daily. Raw Sea Bass, Kohlrabi, and Granny Smith Apple opened the menu in November, with dishes changing so far to bases of Roe Deer venison and Cous Nu chicken.

Barra offers the option of sitting on the high stools in the front, letting you gaze into the kitchen to watch meals being crafted or chat to your sommelier as they shine glasses. Or you can rest and eat in the more secluded minimalist interior of the back room, centered around a large oak table. Everything in this space has been carefully chosen, from the color of the walls to the shape of the bar, and the glass that holds your drink. Ingredients and wines are carefully (local if possible) sourced, with new wine selections being shared on social media for those who wish to know before they visit. Motif Wein bar is hard to miss as you’re cycling down Weserstrasse. In the summer there is always a gaggle of people outside, swirling glasses and socializing, spilling out into the street. The inside is more intimate, with blue walls and bottles of natural wine on almost every corner. Wines from as local as south of Germany or as renowned as Georgia are up for tasting. On one side of the space stands a tall bar to sit at and chat with the owners, and on the other a DJ booth where one of the staff or a guest selects music through the evening. Past compilations are easily found on their website if you seek the ambiance of your last visit.

Furniture has been repurposed from old wine crates and salvaged pieces, adding to the mood. Motif regularly hosts musical performances and is always a favorite spot to bring friends who are visiting the city. The owners, who are friendly and know most of the wine producers personally, give the option of taking home bottles if you so desire. Yet you’ll find yourself staying the whole night to enjoy the atmosphere.

Two notable favorites to drink here are the dry, white Müller-Thurgau 2016 by Bianka & Daniel Schmitt, with clean notes of apple, grapefruit and a matching refreshing acidity, and the light-bodied but berry rich Little Red Riding Hood from Staffelter Hof in Mosel, Germany. Both of these you will see regularly popping up on shelves around the city. Aptly named, Naturales sits only a stone throw away from the canal. The bar, which is warm and casual, boasts a long bar that runs the length of the space. Dark wood, ambient lighting, and a mixture of textures throughout, it could be easy to imagine drifting off here after a meal. The bar offers a selective menu of natural wines, with a preference for Spanish, and a complementing choice of tapas.

When a friend and I visited, we ordered wine from the shelf that was recommended according to our selection of plates. As we ate through our meal, we quickly ordered more before finishing. This was not because they were small, but because we became insatiable to the flavors. We wanted more. Ordering from the carefully handwritten menu, we relished in the spicy chorizo in red wine, artichoke accompanied by oily anchovies, and the native Spanish olives. All washed down with more natural red wine, we left to sit out on the terrace and digest in the fresh air.

For red wine, try the Los Frailes Natural by Case los Frailes. Created from Monastrell grapes, this Spanish wine boasts an incredible mixture of black fruits and balsamic vinegar notes, which transform as it breathes. For a choice of white, the Passerina by San Filippo is light, balanced, and herbal. Another space based in the Neukölln Kiez is La Malo, a French restaurant that rose after the closing of Les Pepilles in the same location. The current project blossomed out of a passion for natural wine by the previous chef Pierre Lejeune, who can regularly be seen there. The restaurant's interior is simple and clean; two white rooms with a smattering of chairs and tables graced only with a few flower vases and shadows thrown with naked lightbulbs. Menus are written up on chalkboards. It creates a striking contrast with the buzzing city outside.

The menu is nuanced with a mixture of French and Mediterranean influences, resulting in dishes that change as the evenings roll over into one another. Items that have appeared on the transforming menu have included risotto with oyster mushrooms, plates pairing mackerel and beetroot, and a dessert of merlot-poached pear with ice cream and almond biscuit.

Susie Kealy (@susiebootz) is a freelance journalist and coffee professional based in Berlin. This is Susie Kealy's first feature for Sprudge Wine.