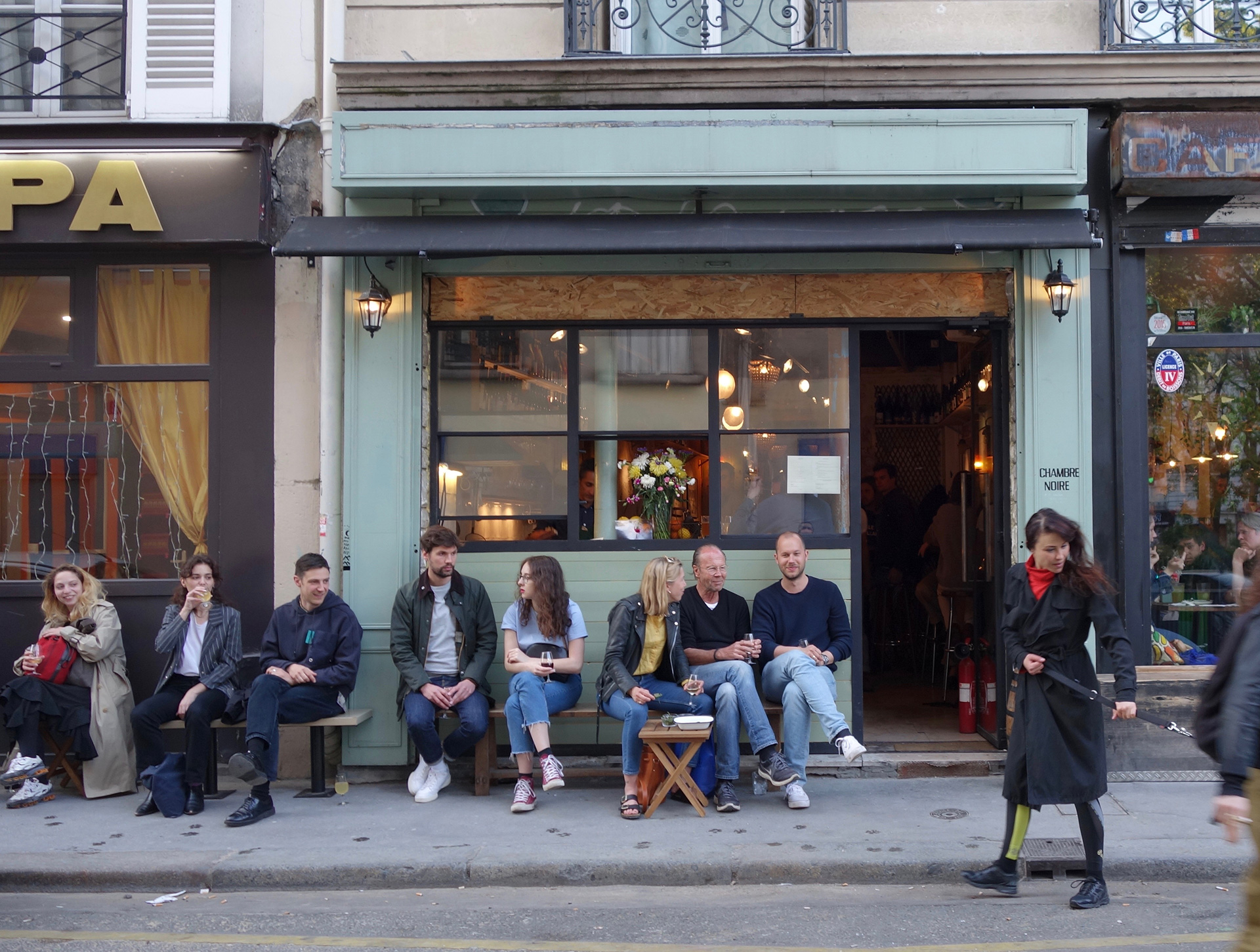 Natural wine in Paris is nothing new, a mainstay at scores of bistrots and caves-à-manger overseen by wizened veterans of the era of Marcel Lapierre and the Puzelat brothers. But each season brings its own crop of new bars that succeed in placing natural wines in a fresh context, through some novel configuration of cuisine, service style, and décor.

Since so much of the appeal of any given natural wine bar depends on the personality and social pull of the wine buyer and/or chef, these establishments sometimes have the lifespan of drosophila suzukii. One year a place is ground zero for savvy industry drinkers, the next it’s either shut or been transmogrified into a dainty, overpriced, touristic version of itself. One has to arrive before the spirit leaves the building.

Fresh in time for summer vacations, here are five new or new-ish Paris natural wine bars where the spirit persists: the most unusual wine selections, the most novel presentations, the most joyous ambiances. Freshly renovated under its new owners, an alliance between the food and wine distribution group Culinaries and the media-friendly natural wine agent Clovis Ochin, YARD Bar à Vin has been remodeled and reinvented for 2018. There’s now an actual seated wooden bar, behind which the veteran chef Svante Forstorp (ex-Vivant Cave, ex-Aux Deux Amis, etc.) shares space with a pair of turntables and a wall displaying a slightly scattershot selection of hip-hop vinyl. Forstorp’s slim menu of auteur bar food reflects the influences of a recent stint cooking in Tokyo (e.g. an egg white cake in eel broth) as well as his own recurrent fondness for fresh pasta and simply-dressed flatbreads. On hand managing the newly transformed bar is the bilingual former YARD owner Jane Drotter, who effortlessly recreates the same warm, unpretentious vibe that captivated east Paris in the restaurant’s earlier incarnation. Wines, as one might expect, come exclusively from Ochin’s now-familiar gang of unsulfured rebels: Anjou’s Sébastien Dervieux, Auvergne’s Patrick Bouju, Partida Creus of Pénédes, etc. If you’ve dined in east Paris in the last nine years, you’ve seen the wines before, but never presented in such abundance and depth. In one sense, République no-reservation bar and restaurant Chambre Noire isn’t new at all: owners Oliver Lomeli and Rémy Kaneko have been developing and refining the concept in fits and starts since 2015. It took until relatively recently however for Chambre Noire to become what it is today: Paris’ youngest, most carefree, most lawless natural wine bar, serving up simple small plates like sautéed root vegetables or burrata alongside a luminescent rainbow of underpriced wines from the European unsulfured winemaking vanguard. So what if some of Paris’ preceding generation of natural wine aficionados refer to Chambre Noire as “a vinegar bar”? With its scrappy-chic decor, its ad-hoc terrace, and its owners’ high tolerance for volatile acidity, Chambre Noire is welcoming droves of younger free-minded drinkers, unburdened by preconceptions of what wine should be and how it should be enjoyed. The Bacchanalian grin of proprietor David Benichou (ex-Vivant, ex-Bar à Vins AT, etc.) beams out over this standing-room-only zinc counter on Belleville’s rue Bichat. Benichou converted what used to be a fun, middlebrow cocktail bar into a natural wine one-man-show where the spartan offering could be summed up as “What Somms Like When Off Work:” German beer on draft, Lambics, craft gin and tonics, and, of course, a broad selection of unsulfured wines from France and around Europe. The menu of stray sheep cheeses, olives, and charcuterie—while impeccably sourced—is secondary to the intimate, industry-heavy atmosphere at Benichat, where stated hours of operation are rather loosely followed and Benichou is by turns sommelier, DJ, and circus-master. The bar is also dog-friendly, as long as one’s dog isn’t afraid of Benichou’s, a friendly, pony-sized Leonberg. In the manner of true enfants terribles, the trio of Michael Grosman, Laurent Perles, and heavy-hitter Japanese chef Masahide Ikuta (ex-Table, ex-Le Grand 8) have utterly upended dining and bar convention at their young restaurant in the historic Marché des Enfants Rouges. They offer a vast, almost Baroque menu ranging from charcuterie to shellfish to pintxo-type small-bites to generous main courses like a perfectly-crisped poularde with a heap of seared vegetables. They do it at lunch and throughout the afternoon, at prices one usually pays for dinner (with evening service offered Thursday-Saturday). The restaurant takes the form of a bar, a ring of seats and a few high tables occupying the former space of natural wine cave-à-manger and lunch counter Versant Vins. These are not the usual bar hours, unless one is accustomed to drinking bottles of Andrea Calek’s Ardèche white at 4PM. The ensemble shouldn’t work, but in the tourist-friendly Marché des Enfants Rouges it does. Les Enfants du Marché is the only place in Paris where one can enjoy an indulgent natural wine bar-à-manger atmosphere at weird hours of the day, making it ideal for gastronomic globetrotters and the most dedicated bons-vivants. The moment the 10th arrondissement truly became Paris’ equivalent of London’s Soho—and the moment restaurant names caught up to Soundcloud rappers—was in spring of 2018, when restaurateur Arnaud Lacombe and chef Pierre Touitou (both of nearby Vivant Cave) opened their steely, standing-room-only natural wine bar Déviant, with a bright exclamation point replacing the ‘i’ in the logo. The name deftly repurposes the usual derogatory descriptor thrown at natural wines, while the attention-grabbing space—marble counters and mirrored walls surrounding a well-equipped kitchen, entirely open to the street—enforces an anarchic ambiance brilliantly at odds with the luxuriant small-plate cuisine on offer, from crisp gem lettuce beneath a swarm of pistachio and caper, to gently spiced chicken wings. Déviant may not be a place for, well, careful assessment of natural wines, but that is a feature, not a bug: the bar is a sprawling melée of swaggering young professionals, mostly male, many presumably awaiting entry the moment when Arnaud Lacombe’s adjacent Hotel Bourbon nightclub opens.