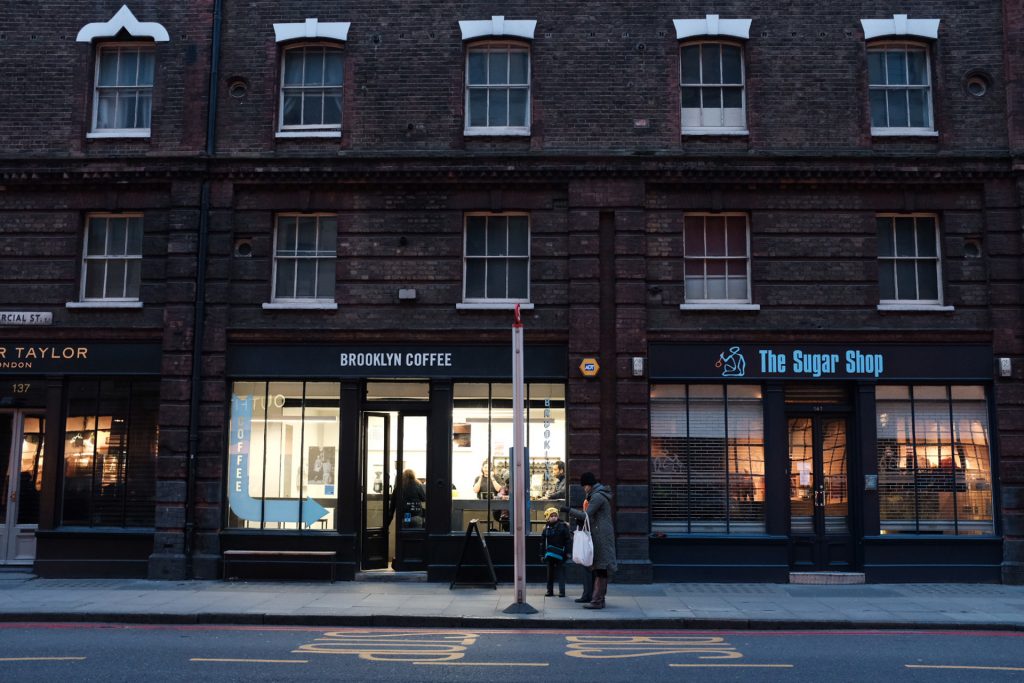 It’s still dark in East London’s Shoreditch neighborhood, just a block from the famed Spitalfields Market, as a small army of besuited office workers walks in the door at Brooklyn Coffee, each ostensibly on their way to the nearby financial district.

“Morning Brian. Just the usual?” co-owner Reina Alexander greets the first customer. Another barista has already begun the drink, and it’s ready by the time the transaction is completed. The warm hospitality contrasts with the spartan, Brutalist interior, but Brooklyn Coffee is full of subtle, thoughtful surprises.

I sit in the corner, occupying one of six stools at the concrete window bar. I’m nursing a shot of espresso roasted by Caravan Coffee Roasters—Brooklyn Coffee’s exclusive coffee provider. The espresso is excellent, but the real reason I’ve come is lined up on the opposite wall: a solitary row of horizontal wine bottles, next to a repeated, bright red mantra: Don’t Wine. (I confess to only getting the pun later, after saying it out loud.) The brand-within-a-brand is a way for Alexander and her partner Bryan Jackson to combine their passion for low-intervention wine with their specialty coffee business. “We were attending an Aussie winemakers night at Terroirs in Covent Garden while whining about the lack of decent natural wine shops in our area,” says Jackson. “Then after a few glasses we said to each other, ‘we really need to stop whining about this and do something about it.’ And so we did.”

In many ways, the pairing makes sense. The similarities between coffee and wine, especially specialty coffee and natural wine, often invite comparison. “They are so similar. They are both fruit. They both have numerous varieties,” explains Jackson. “Both influenced heavily by soil, climate, as well as farmer expertise and gut instinct. They are very similar in the way we taste them as well as the words we use to describe them.”

For Alexander and Jackson, the wines are selected by a strict criteria. “First and foremost that it is delicious. This is the most important aspect. After that is a care for the grapes and the environment that they are grown in—no chemicals or pesticides used on the land, very little intervention in the cellar, and finally little or no sulphur added at any stage of the process—to hopefully showcase the natural beauty of the grapes, terroir, and wine producers' instincts that end up in the bottle.” An example of all of these qualities is Don’t Throw Wine in the Ocean, Please, a wine with an origin story as curious as its name. The cuvée is a collaboration between Noma sommelier-turned-winemaker Anders Frederik Steen and legendary Jura vigneron Jeac-Marc Brignot, who retired to the Japanese island Sado. This blend of Syrah and Grenache was named after Steen witnessed an island of plastic debris floating in the ocean from an airplane window. The hand-applied labels are printed in eleven different languages (the bottle I purchased was Arabic), and are designed to spark conversation at the dinner table about environmental conservation.

Other bottles on the Don’t Wine shelf include Tommy Field Syrah from Australian maker Tom Shobbrook, as well as an assortment of cuvées from Davenport Vineyards, a vineyard in Sussex that’s been producing certified organic wine since 1991. According to Alexander, Davenport is challenging the notion that English wine can’t be as good as their neighbors to the south. In spite of the similarities between coffee and wine, Alexander and Jackson admit the difference in business models between a cafe and bottle shop present their own challenges. Whether it’s the financial disparity between a £2 espresso and a £20 bottle of wine, the time of day people normally visit a coffee shop, or even the unexpectedness of the combination, many customers have been reluctant to embrace the wine program. Other customers just need some reassurance: “It's ok to purchase a bottle of wine with a cup of coffee and all before 12 o’clock,” says Jackson. Brooklyn Coffee’s license only permits them to sell wine by the bottle, but during the warmer months they host tasting events and the occasional party to help promote the program.

At the end of the day, the success of Don’t Wine is built on the same hospitality fundamentals that have carried Brooklyn Coffee.

“Fortunately [our customers] have seen the parallels in the two products that we sell,” says Jackson. “They've trusted that we place the same time and effort into the coffee that we serve as we do in the wines we bring in.” Up Late With Charlie Mellor And London’s The Laughing Heart